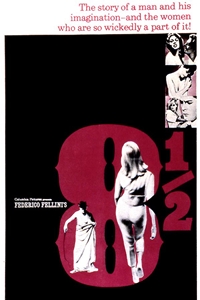 Federico Fellini, who would have celebrated his 100th birthday this year, is without question an icon of world cinema, winning more "Best Foreign Film" Oscars than any director while being ranked by THE CINEMA ARCHIVES as the #5 filmmaker of all time and #17 by ENTERTAINMENT WEEKLY magazine. In a career spanning four decades, Fellini established himself as the heart and soul of Italian cinema ranging from the Neorealism post-war period through the height of the "art film" era of the 60s and into the politically and sexually dynamic films of the 70s. The Esquire celebrates this recipient of the "Order of Merit of the Italian Republic" (its highest ranking honour) with three of Fellini's unforgettable classics from the three main decades of his cinematic prominence:

8 1/2 is certified Fresh on Rotten Tomatoes with a 98%! The Critics Consensus: "Inventive, thought-provoking, and funny, 8 1/2 represents the arguable peak of Federico Fellini's many towering feats of cinema."

Well into the peak of his prolific career, Fellini made the self-reflective 8 1/2 as a chronicle of his own struggles as a filmmaker (having made eight prior films) with what SIGHT AND SOUND credits as the 10th greatest film in movie history. Fellini's alter ego (following the 1960 masterpiece LA DOLCE VIDA) Marcello Mastroianni is brilliant in the lead role of a director searching for motivation and meaning at a spa setting for his next film. Another winner of the "Best Foreign Film" Oscar, 8 1/2 is ranked by the British Film Institute in the top 50 films of all time, and was the inspiration for the Broadway musical smash hit NINE, as well the 2009 movie based on that musical (in addition to Woody Allen's STARDUST MEMORIES).

Synopsis: Exhausted from the success of his latest blockbuster film, already feeling pressured to come up with another smash hit, and suffering from a massive creative block, filmmaker Guido Anselmi (Marc Mastroianni) heads off for a mountain resort to recharge and come up with a new idea. His search for inspiration leads him down many strange, twisted paths and these journeys provide the basis of the rollicking, at times riotous, long and mesmerizing 8 1/2, simultaneously one of Fellini's best loved and most deeply personal films.

Don't miss the rest of the series!

The 4:00pm show each Sunday will include an intro and Q&A discussion with Film Professor Joe Horine!