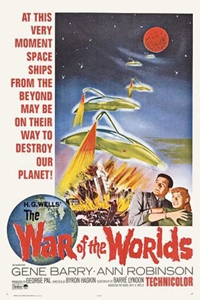 Earth is under attack in the chilling Cold War classic "The War of the Worlds" (1953). In one of the greatest science fiction films of all time, invaders from another world target a small California town with autonomous probes and laser disintegration rays. A terrifying vision of an America under siege based on the novel by H.G. Wells starring Gene Barry, Ann Robinson and Les Tremayne and featuring Academy Award-winning special effects. This special Collector's Edition includes a making-of documentary, Orson Welles' original Mercury Theatre Radio Broadcast of "The War of the Worlds" and more. With a French language track.

Showtimes for
Friday, May 29