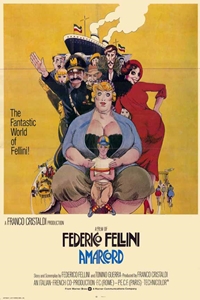 Federico Fellini, who would have celebrated his 100th birthday this year, is without question an icon of world cinema, winning more "Best Foreign Film" Oscars than any director while being ranked by THE CINEMA ARCHIVES as the #5 filmmaker of all time and #17 by ENTERTAINMENT WEEKLY magazine. In a career spanning four decades, Fellini established himself as the heart and soul of Italian cinema ranging from the Neorealism post-war period through the height of the "art film" era of the 60s and into the politically and sexually dynamic films of the 70s. The Esquire celebrates this recipient of the "Order of Merit of the Italian Republic" (its highest ranking honour) with three of Fellini's unforgettable classics from the three main decades of his cinematic prominence:

While Fellini continued making films for another 17 years, AMARCORD is one of his fan's favorites as perhaps the most autobiographical "I remember" work of nostalgic memories from his childhood in Fascist Italy. Also a winner of the Oscar for "Best Foreign Film," AMARCORD is highly influential on many similarly themed films (including Woody Allen's RADIO DAYS) and holds up as both poignant and hilarious today.

Certified Fresh on Rotten Tomatoes with an 87%, the Critics Consensus: "Ribald, sweet, and sentimental, Amarcord is a larger-than-life journey through a seaside village and its colorful citizens."

Don't miss the rest of the series!

The 4:00pm show each Sunday will include an intro and Q&A discussion with Film Professor Joe Horine!