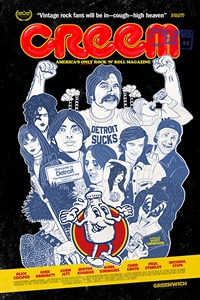 Capturing the messy upheaval of the '70s just as rock was re-inventing itself, the film explores CREEM Magazine's humble beginnings in post-riot Detroit, follows its upward trajectory from underground paper to national powerhouse - spotlighting iconic features, interviews, and anecdotes along the way - then bears witness to its imminent demise following the tragic and untimely deaths of its visionary publisher, Barry Kramer, and its most famous alum and genius clown prince, Lester Bangs, a year later. Fifty years after publishing its first issue, "America's Only Rock 'n' Roll Magazine" remains a seditious spirit in music and culture.