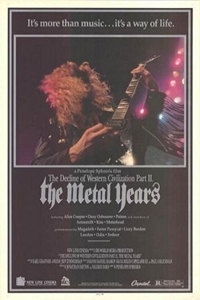 Torn Light Records and the Esquire Theatre are proud to present a rare screening of one of the most infamous documentary sequels of all time: THE DECLINE OF WESTERN CIVILIZATION PART 2: THE METAL YEARS!

Filmed seven years after the first DECLINE movie, and shifting the focus from underground LA hardcore punk, to the glitter and excess of the heavy metal and glam rock bands of the Sunset Strip, DECLINE 2: THE METAL YEARS is a debaucherous journey into the sleaziest and most decadent music scene of the 1980's. Featuring performances by LIZZY BORDEN, FASTER PUSSYCAT, SEDUCE, LONDON, ODIN and MEGADETH, and interviews with the likes of ALICE COOPER, LEMMY KILMISTER, OZZY OSBOURNE, PAUL STANLEY, GENE SIMMONS, AEROSMITH, POISON, VIXEN and W.A.S.P.! Just like like the first film in the series, this is a rare screening of this culturally signifigant sequel and one of the wildest documentaries of all time!

As always, all in attendance are entered in a raffle for DECLINE related prizes!